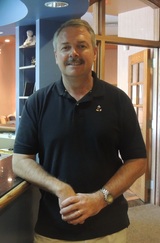 Dr. Kevin Arthur grew up in a family that placed high values on service to those in less fortunate circumstances. At the age of four, he and his family moved to South Africa to serve on the mission field. This was a great experience for the family and instilled in him the value of service to others in need.

He attended Emmanuel College in Franklin Springs, GA. Dr. Arthur finished up his undergraduate training at UNC Chapel Hill. After marrying his wife, Cathy in 1980 they continued their education in Chapel Hill at the UNC School of Dentistry. Cathy graduated with a B.S. in Dental Hygiene in 1982. Dr. Arthur received a Doctor of Dental Surgery degree in May of 1985.

The Arthur's started a dental practice in North Raleigh in the fall of 1985, but in April of 1988, decided to move the practice to Garner, NC. He became an associate in the practice with Dr. Lewis Woodard DDS in 1988 and worked with him until Dr. Woodard retired in 1995. Dr. Arthur continued working in the Aversboro Rd. office until the office relocated to a new facility on Timber Dr. in June of 2000.

In his spare time Dr. Arthur enjoys spending time with his family, and traveling whenever possible. He also enjoys fishing, scuba diving, and being very involved in his church.

Dr. Isaac Boota was born in Pakistan to a large and loving family. At the age of 14 he moved with his family to Greenville, NC where he put down roots and has since called home. It was there that he married his high school sweetheart, Sarah, after completing his undergraduate degrees in Chemistry and Biochemistry from East Carolina University.

Dr. Boota and Sarah have always worked as a team to support each other’s passions and goals. After graduating from university, he worked as a quality control scientist at a pharmaceutical company for two years to support his wife as she completed her Nursing degree from ECU. Sarah then began work and Dr. Boota returned to East Carolina University to obtain his Doctorate in Dental Medicine.

Dr. Boota was drawn to ECU’s School of Dental Medicine due to their focus on outreach to underserved communities through the opportunity to practice at different clinic sites in rural areas of NC. This allowed him to provide care for people from all over the state and practice alongside a multitude of experienced dentists. Throughout his time at ECU’s Dental School, he served in many leadership and outreach positions at the local and nation level. Dr. Boota enjoyed his leadership roles at the national level in the Christian Medical Dental Association and at the local level in the American Student Dental Association and Academy of General Dentistry.

Upon graduation from the Dental School in 2021, the Bootas relocated to Raleigh, NC and are expecting their first child who is due in July. In his free time, Dr. Boota enjoys playing tennis, reading, being involved in the church and spending time with his wife and family. Dr. Boota is excited for the opportunity to practice at Kevin Arthur Family Dentistry and looking forward to serving you and your family in caring for your dental health needs.